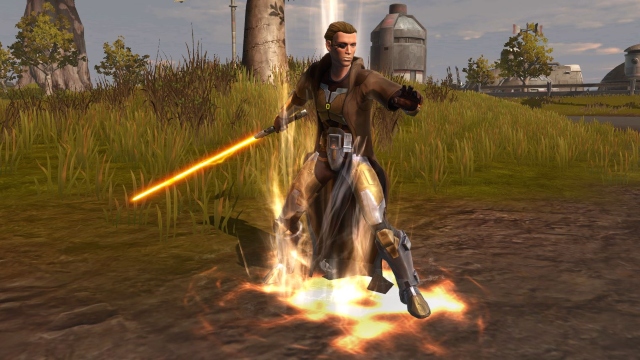 Star Wars: The Old Republic is a mass multi-player played online role-playing game (MMORPG) based in the Star Wars universe. Developed by BioWare Austin and a supplemental team at BioWare Edmonton, the game was announced on October 21, 2008. The video game was published for the MS Windows operating system on December 20, 2011 in North America and part of Europe. Early access to the game was granted one week before release, on December 13, 2011, for those who had pre-ordered the game online; access opened in “waves” based on pre-order date.

Here are some SWTOR advices: Don’t start right away from lvl 60/65/70. Even if you don’t care much about what I said just now, consider this. This game has a beginning (which is long in the past now), a present and a future. don’t skip the most important part. Start your adventure from lvl 1, save yourself the money for that token (if you got it for free with your Subscription, save it for later usage). Starting from 1 will help you learn better the world of SWTOR. It will teach you of what the game is about, it will allow you to fully experience the real power of this MMO – its story aspect. Well, it’s not the end of the world (Pff!) if you scratch this advice completely and ignore my words, but I secretly hope that one day you will indeed go back, play all the 3 original chapters (lvl 1 to 50) on your favorite class, come back to this guide and tell me “I loved the beginning, you were right to advice us to Doso.”

The next method of earning Swtor credits is much more effective, yet risky – crafting different items according to your character(s), crafting professions and acquiring skills and then selling them directly to other players or on the Galactic Trade Network (GTN). To work this out, you’d probably have to have multiple characters with excellent Crew Skills levels. You’ll also have to give more time to adding your crafted things to GTN. It is important to understand which crafted objects sell well at particular times. The trend doesn’t change every day, however between patches it’s possible that the most popular item might tomorrow become totally useless and unsellable. You need to do your research and discover what sells well and craft it. Bear in mind that the time taken by gathering the resources and crafting the objects should also be considered while calculating your profit. The longer you take for an activity, the less productive it becomes.

For instance, you can do the Coruscant heroics in around 10 minutes and if you also do the bonuses, you get around 250k. After that, if you’re a stealther, you can finish them in less than 5 minutes, skipping the trash mobs in other days. Balmorra heroics give around 450k if you do all the bonuses (I usually skip Industrial Sabotage, because it’s slow). A complete Ossus run (weekly, weekly heroics, daily patrol) can give you around 400k. Also, if you have enough copies of a certain random drop decoration, you can sell them for 25k a piece. Oricon has a fair number of bonuses and can get you 250k, but I don’t recommend it to non-stealthers, Black Hole, Czerka, Ziost weeklies take less than 10 minutes etc. Ord Mantell is good once a week if you’re a smuggler or a trooper, as you can do all 3 quests and the bonus in 5 minutes.

Do you want to avoid the credit ugly grind? There are some solutions to your issue. Nobody likes boring grinds, especially when there are so many other fun things to do in a MMO like SWTOR. Discover extra details on SWTOR Credits. By keeping our website up-to-date, we can ensure an upscale shopping experience thanks to a reliable and secure transaction platform: your payments as well as any information given to us are 100% protected and will never be acquired by any third parties. If you have any problem, Please feel free to contact us,and we will provide you the most professional customer support. And it will open for you 24 hours every day.